The annual Bett Awards are the ‘Oscars’ of the EdTech industry, bringing together innovative and practical educational technology solutions from industry experts across the globe. We are thrilled to announce that the recipients of this year’s Outstanding Achievement Award were our very own John and Ann Crick! 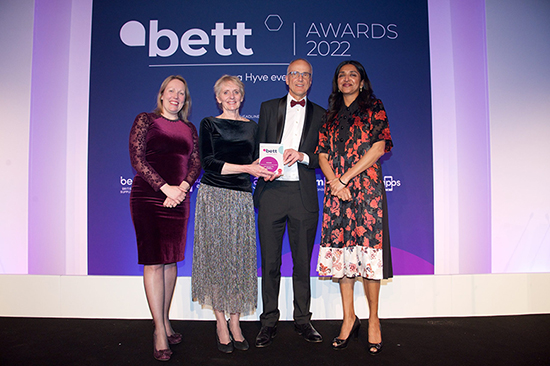 “It’s a massive honour to receive the Bett Outstanding Achievement Award – a very big thank you to everyone involved in the decision. A lot has changed since starting in our back bedroom 29 years ago, but the continuous improvement of our products continues with the same passion as ever.

Our talented and dedicated team at Crick, together with the support and suggestions from the worldwide Clicker community play a central role in the ongoing story of Crick Software. Day after day, teachers everywhere are helping pupils of all abilities to reach their full potential, and we’re very proud to be a part of that.”

The idea for Clicker came to John in the early 1990s when he was working in a special school for children with physical disabilities. These new things called ‘computers’ had begun to appear! It was an exciting time; getting children connected up with trackballs and switches, creating new output opportunities for them. He wanted to get them progressing with their literacy and language development, but there wasn’t anything around that could give kids access to writing, and it would be far too arduous to do this letter by letter with switches.

He started formulating an idea… wouldn’t it be great if you could have a grid with words that would go into a word processor when you selected them, that was scannable, and that the teacher could instantly tailor without having to use a complicated editor. Twelve months of hard work and 2am programming sessions later, Clicker was born!

When John started testing Clicker, his wife Ann, a primary school teacher, saw what he was doing, clicking on words and sending them into the word processor, listening to them speak etc., and thought that this would be a fantastic tool for the kids she was working with, to help them with their writing. This was the light-bulb moment… they realised that they had something that wasn’t just a specialist tool for switch-users, as important as that function is, but something that could help every child become a better, more confident writer. In a sense, they stumbled upon universal design by accident before it even became part of our terminology!

Twenty-nine years, 8 versions, 10 language translations and 19 major awards later, Clicker is supporting and empowering young writers in thousands of schools around the world.

"For me, it’s one of the most inclusive pieces of software there is.”
- John Galloway, Advisory Teacher for ICT, SEN and Inclusion

“I’ve been using Crick Software’s Clicker program since iteration 4, so have had the opportunity to follow its development over 20+ years. Every time a major update is released, I am quite simply blown away by the improvements. I am definitely one of Crick’s biggest fans!”
- Claire Barnes, Willow Dene School

“I would say it’s the gold standard piece of software to support reading and writing for any age, primary, secondary, higher education.”
- Carol Allen, ICT and Inclusion specialist

John and Ann have been at the forefront of inclusive software development for more than a quarter of a century, helping new generations of learners to experience those same feelings of pride and success. Their commitment to universal design and inclusion is evident in every iteration of their software. Undoubtedly an outstanding achievement!