When I first began working for Crick Software last summer, I was instantly impressed with how customisable Clicker 7 is. Although used mainly in primary schools, there are so many ways to tweak Clicker 7 to suit older learners.

I realised that Clicker 7 would be perfect for my older sister, Aoife. Aoife has Down’s Syndrome and although she has done many remarkable things in her life (winning a gold and two bronze in the Special Olympic World Games being one of them!) literacy is an area that has always held her back.

When Aoife began using Clicker, mainly for writing college assignments, there were several changes I made to ensure Clicker was more suitable for her.

Clicker has two children’s voices – Rosie and Harry. Two adult voices, Rachel and Graham, are available from our website. I downloaded these voices for Aoife to use. Both are available to download here.

Secondly, when Aoife began to use Clicker it became apparent that the speed of the speech was a little too quick for her to listen back to and process.

In the Options ribbon tab, I selected Preferences. Within the tab marked Speech, I set up Rachel as the voice and slowed down the speed of speech as indicated below.

Another change we quickly made was the font size and style. Clicker comes with a pre-set font of Sassoon which is a primary font. In Options > Accessibility, we changed the font in both the Document and Clicker Sets as shown below.

Here is an example of what Aoife’s word processor now looks like. It is set up to be both age-appropriate and level appropriate for her. She is currently in college completing a module on human biology. 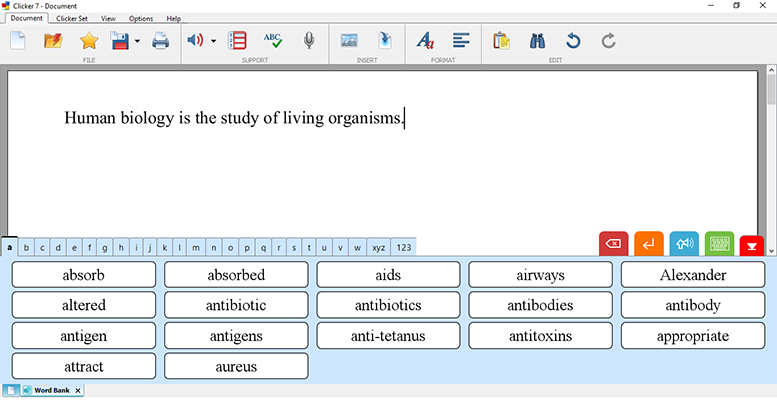 The stand-out feature for Aoife has been Voice Notes. As she has a poor working memory, allowing her to capture her ideas before the mechanics of writing has made a huge difference. Until Aoife began using Clicker, she would sit with my mum and talk about what she wanted to write about. Voice Notes has allowed my mum to take a step back and let Aoife work more independently.

All of us, including Aoife, did not think we would find a resource that would make a real difference to her writing, particularly as she is now an adult, but we were wrong. Clicker helps Aoife every day to demonstrate her knowledge in a more clear and coherent way.