Recently, a customer contacted me asking about Clicker resources that they could use with children studying Shakespeare. We have lots of resources on the topic of Macbeth and it’s easy to create even more, so I thought I’d share some ideas in this blog post.

After finishing the play, you can use Clicker to examine the plot in more detail. With the Macbeth Storyboard, you can summarize the events in each act of the play. This Clicker Board includes Voice Notes for audio recordings, providing more detail or analysis on the plot. They could also be used for children to record their initial ideas before putting them in writing. 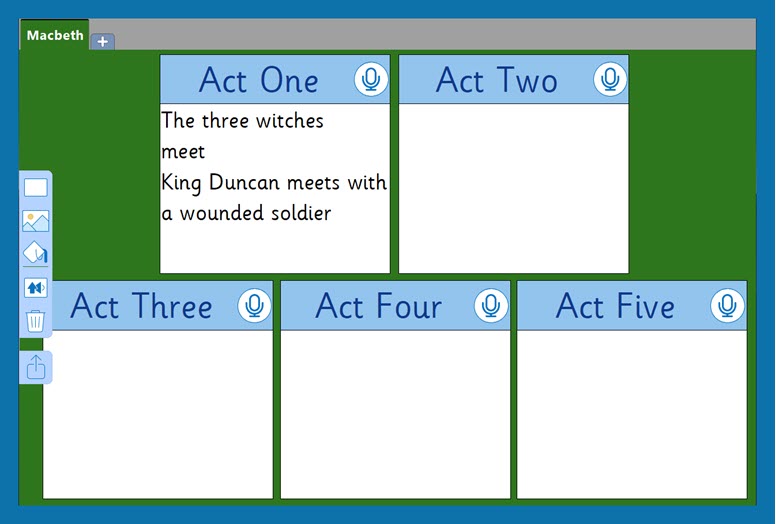 Alternatively, you could create a ‘Tell the Story’ Talk Set with images from different key events in the play. These images could be screenshots from a modern film adaptation or photos from a theatre production. You could also get children involved in the creation of the activity by asking them to freeze frame key parts and take a photo for the activity.

Clicker Books can also be used in different ways. You could re-write the story of Macbeth into a Clicker Book and with the Record & Play button, children can record their character or text analysis. They can also add a Picture Bank and Word Bank to create their own retellings of the story. 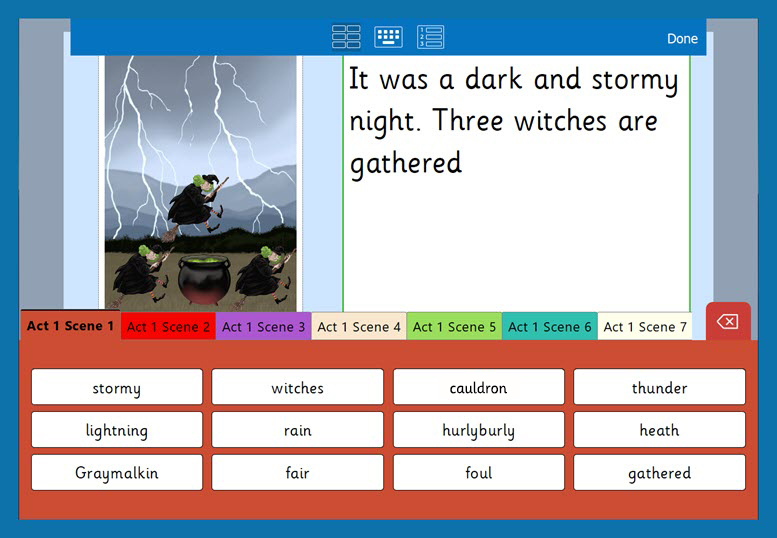 A good starting point when examining the characters is the Characters in Macbeth – Mind Maps set. This resource includes a mind map for five of the main characters in Macbeth, with each including space to add an image relating to the character. For example, you could add a photo from a modern adaptation or children could draw their own images using the Paint tool – this could be their own interpretation of how the character would look or a symbol to represent their role in the play. They can then gather key vocabulary relating to that character. This could be used throughout the topic, starting at the beginning to see what children already know of the play and adding to it throughout. This way, learners can see how the different characters progress throughout the course of the play. 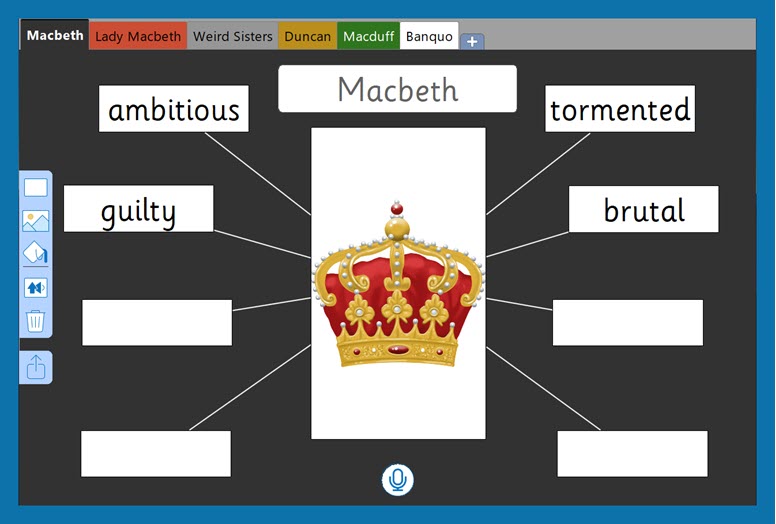 You could create a ‘Talk About’ Talk Set for a hot seating activity. Add images representing the different characters and increase the number of recordings per image depending on the number of questions you want to ask. This creates a comprehensive activity during this topic and could inform other tasks, such as writing a diary entry at a later point. 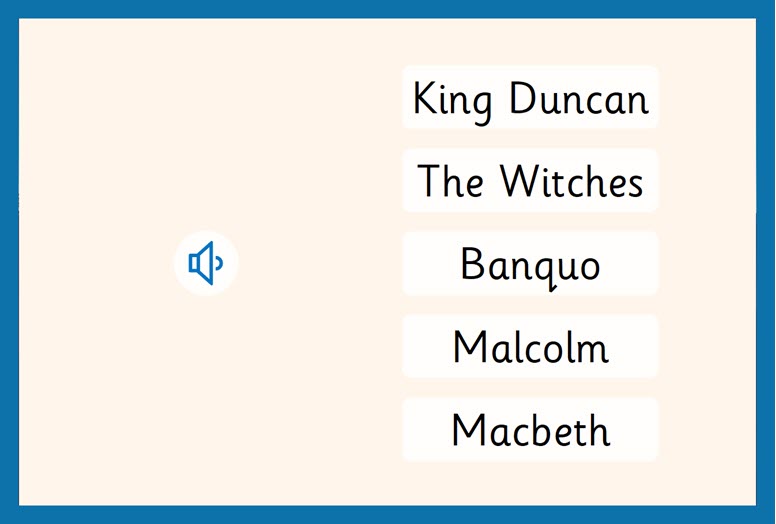 Support children when retelling the story with the writing grids. The Macbeth Sentence Set provides lots of support for younger learners to be able to demonstrate their understanding of the plot. Older learners can use a Sentence Set as a starter activity to recap the key plot points, and you could edit this resource to remove the model sentence for an additional level of challenge. 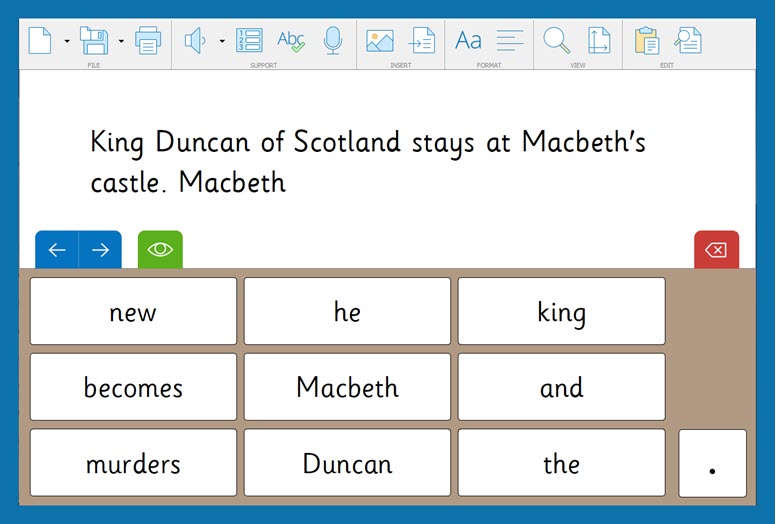 The Macbeth Connect Set provides scaffolded writing support for retelling the plot. It’s a great way of assessing children’s understanding of the sequence of events throughout the play and helps learners to develop their use of new topic vocabulary. 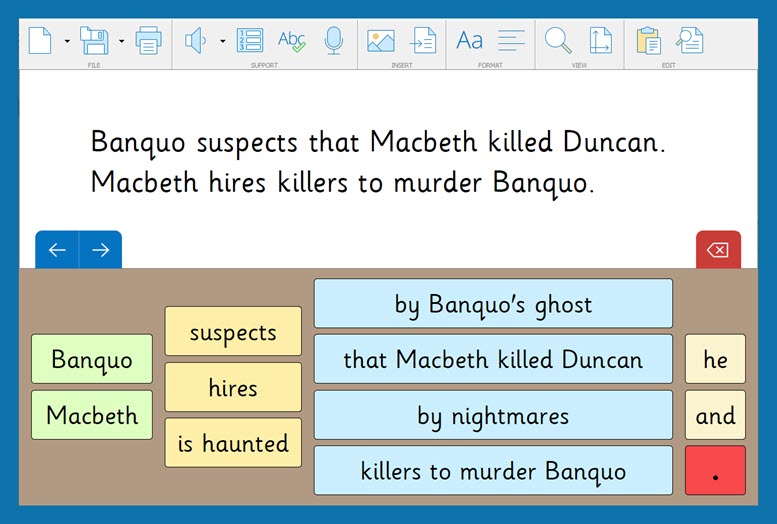 There are also three ready-made Macbeth Word Banks you can use depending on the task and support you want to offer. The Quick Words Word Bank provides one grid with key vocabulary for writing about Macbeth. It’s quick and easy to access the necessary vocabulary for a whole range of related tasks. The A-Z Word Bank provides a wide range of vocabulary that is ideal for supporting an extended writing task. The final Macbeth Word Bank offers grids covering plot, setting and characters making it easy for children to find the vocabulary they need when writing about different aspects of the play. 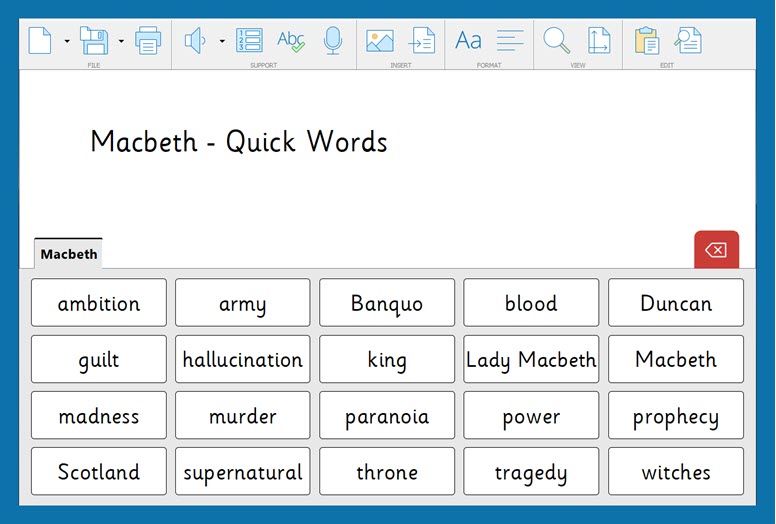 Cloze Documents are a great way of assessing children’s understanding of the events in Macbeth. This could be quickly created using a copied and pasted summary of the play and the express remove tool. You could also remove key words to check for common misunderstandings.

Cloze Documents are a great way of assessing children’s understanding of the events in Macbeth. This could be quickly created using a copied and pasted summary of the play and the express remove tool. You could also remove key words to check for common misunderstandings.

They can even be used to support children’s own attempts at creative writing. By outlining the story but removing key names and actions, children can fill in the gaps with their own ideas. 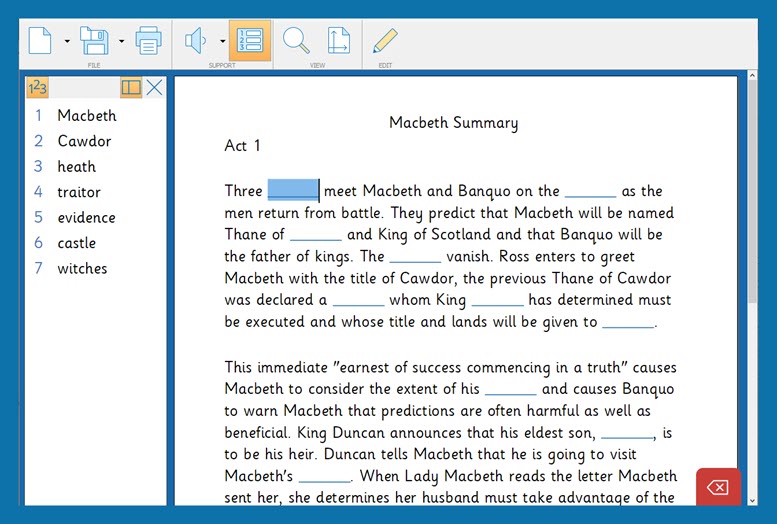 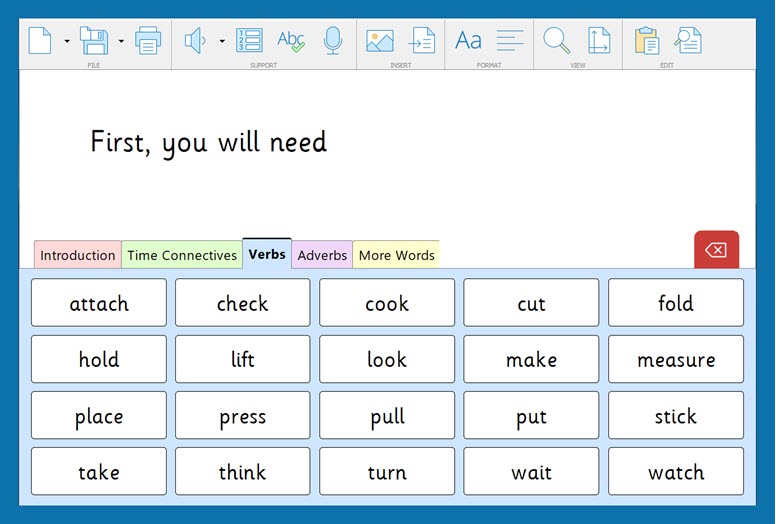 Finally, you can support children writing a diary entry from the perspective of one of the characters using a Clicker Book. You can provide Word Banks to support this, and you could refer back to previous activities, such as hot seating and ideas gathered in the Characters in Macbeth – Mind Maps. You can also use the video function to make this a video diary with the use of a webcam.

These examples are for a specific topic, but there are many resources that can be applied to different subjects with Clicker 8.

If you have a particular topic or lesson idea that you would like some help with, you can contact me via email at gemma.dean@cricksoft.com.